If you like your humour as dark as your coffee, there's a good chance Mango Protocol's latest point and click adventure Agatha Knife might be for you. Offering a satirical slant on religion and being chock-full of grotesque imagery, the title follows the misadventures of seven-year-old Agatha, a troubled young butcher who loves to slash apart the animals she befriends. The twisted adventure was first released on Steam last April but has now slashed and torn its way onto the Switch and Xbox One, delivering over four hours of gory fun.

Playing as the titular child, you are first whisked off to the local church by your mother to prey for a solution to your financial woes. After deciding that church is too boring to endure, you wander off and encounter a strange man who proposes you create your own religion. Driven to save your butchers shop and the animals you desperately hope to slaughter you take action to make your religion 'Carnivorism' a reality: assembling a sanctuary, a holy book and a God for its followers to worship. With the help of magician the Great Sundando, you also take on the role of a prophet spreading the word of Carnivorism and persuading farm animals to join your cause.

This novel concept of creating your religion is backed by an excellent supporting cast with almost every encounter delivering a laugh or two. There's a homeless man who has a cat living in his beard, an overweight man who has been imprisoned in a booth and forced to sell lottery tickets, and a professional wrestler who is seen prancing around in a tutu. Some may find its humour crude or mildly offensive at the least, but as fans of dark comedy, we found it to hit all the right notes. If you are easily offended or of the faint-hearted then it's perhaps not going to resonate with you in the same way, especially due to how focused it is on character interactions and story.

Agatha Knife plays like your typical point and click adventure; you'll interact with quirky characters, collect items and use the contents of your inventory to solve puzzles. The main objective is to set your religion in motion and you'll venture beyond the boundaries of Agatha's hometown to a handful of new locations. Selecting and using items in your inventory is as simple as pushing Y (on Xbox One) and using the X button to interact with other objects. We did find using the right trigger as a cursor to be awfully slippery though and we found ourselves missing where we wanted to click a handful of times. It seems the Xbox One has the short end of the stick here though, as the Switch has touch controls and on PC you can easily move the mouse to select objects.

With the sheer amount of backtracking you'll have to undertake, traversing through the town can feel tedious especially without a robust fast travel system. Sudando will teleport you between the butchers and the circus (they're opposite ends of the map) but we wish there was more throughout as Agatha can take an eternity to cross the road between screens. There's also no map for you to refer to which can be a pain in the earlier stretches of the game when you aren't fully familiar with the town's layout. This wouldn't be so bad if the game wasn't so linear but as you are simply walking along one long road and as there's little change in scenery, it can be a drag and you can easily lose your bearings.

The hand-drawn art style we felt fit perfectly with its twisted sense of humour and reminded us of the crude look of adult comedies in the vein of South Park and Back Horseman. The soundtrack, however, is a little flat and lacks the personality seen in the visuals and script, it feels as if it was handpicked from a library of stock music. Those interested in playing better grab their reading glasses too, as Agatha Knife has no voice acting and instead uses text bubbles. This is something seen in quite a lot of indie titles but it's something that can become tiresome as there is a lot of dialogue to scroll through. Fortunately, though, it's tightly scripted and isn't short of laughs either.

Often hilarious and at times disturbing, Agatha Knife is a good indie point and click game that isn't ashamed of its twisted personality. We loved the crude animation style, and the oddball concept of creating a meat-eating religion felt fresh and unlike anything we had played before. We did feel that there were some issues with navigation and controls which held it back from being a truly 'must play' experience, but that being said, it's still worth a look if you're a fan of dark comedy and classic point and click adventures.

Gamereactor UK
+
It has a novel concept and a twisted sense of humour, it's characters are likeable and distinct, and the hand-drawn visual ooze charm.
-
Controls feel a little slippery, navigation can be tedious, and the soundtrack is weak compared to the script and visuals.
is our network score. What's yours? The network score is the average of every country's score

"Often hilarious and at times disturbing, Agatha Knife is a good indie point and click game that isn't ashamed of its twisted personality."

We talk to Mango Protocol about their upcoming point-and-click adventure. 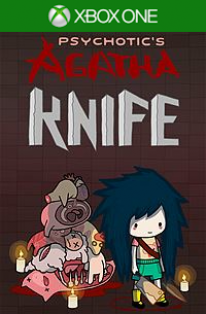