What we thought would be an easy review turned out to be quite the challenge in the end. We took it upon ourselves to review a small game from Swedish indie developer Forgotten Key, but we knew nothing of the journey ahead of us. You can easily finish the game within two or three hours, but we're only ready to review it after about ten hours.

You play as Auk, a girl who can transform into a bird. Auk is on a pilgrimage in the Land of the Gods. The world consists of floating islands in the sky, and you travel through the ruins of a long-forgotten civilization to save what's left of the world from a horrible fate. The story might not be the best one ever written, but it does its job and kept us just about interested enough to continue. The most engaging thing here isn't the main story, though, rather it's the subtle backstory you find in the environments. Glimpses of forgotten times, before the world was broken, tell their own narrative that's levels above the main story. We won't delve any deeper into this as it threatens to spoil your experience.

AER: Memories of Old is a beautiful game. The visuals are minimalistic, beautiful, and timeless, and the soundscape is simple but altogether powerful in its own right. We had a great time flying between the islands, diving towards the ground and pitching ourselves up again just before we would have crashed into the ground. But after only a short while of exploration, we discovered a problem; there's not much to do here except pursuing the main story quest. Sure, there are a few places here and there where you can pick up a little of the backstory, but when you look at the big picture, there's absolutely nothing else to do apart from story missions. The flying is great and beautiful for about ten minutes, then it gets boring and repetitive.

Let's return to the puzzles for a bit. The big problem here, if we ignore the fact that we were a bit rubbish at times, is that a lot of them are repetitive in their setup. Go here to pick up an artifact, find out that you need a key, solve a few puzzles, find the key, turn back, open the door, solve a few more riddles that are pretty similar to the last ones, get your artifact, return to base, get to the next location, rinse, repeat. The game got gradually less fun the more we played it because the challenge faded with every other puzzle.

Another source of frustration was the jump button. We're used to our character jumping when pressing said jump button. Not half a second later. This might not seem like a big problem, but when half the riddles require precision jumping, that really does become a big problem. We played on PS4 and checked the settings up and down more times than we can remember, but found nothing. All the other controls worked like a dream too, so our only conclusion is that this was an intentional choice. It was a weird one if that's the case.

AER: Memories of Old is undoubtedly inspired by games like Journey and Abzû. We'd even claim that there's a bit of The Witness thrown into the mix as well. Pretty big names, but we don't think AER will dine with these greats anytime soon. Nevertheless, Forgotten Key's effort should really be applauded. At times we might have found it taxing, but we also got a massive sense of achievement more than once, when we finally got past certain puzzles.

The game fails at providing an interesting main story, but it makes up for it by including the Memories of Old, the more subtle environmental storytelling of ages past. It's beautiful, the soundscape is magical, and the atmosphere of the game is impeccable. We may have had a problem with a couple of the puzzles and riddles, but that doesn't mean that you will. AER: Memories of Old is a good game, and if your interest is piqued by everything you've read so far, it's probably worth a go.

Gamereactor UK
+
Good backstory in the environment, cool visual style, good sound and mostly good puzzles.
-
The jump mechanic sucks, too little content in an open world, repetitive pattern in puzzles.
is our network score. What's yours? The network score is the average of every country's score

"The visuals are minimalist, beautiful, and timeless, and the soundscape is simple but altogether powerful in its own right."

Aer has the "vibe of both Zelda and Journey"

After four years in development, it's almost upon us.

AER is "an adventure among the clouds"

It's still a long way off in the distance, but AER is one game that we can't wait to explore properly.

AER could be released for Wii U as well

But focus is on the announced platforms for now.

Daedalic to publish adventure AER on PC, PS4 and Xbox One 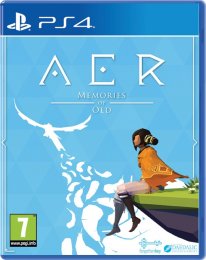