We talked to Robin Hjelte from the Swedish indie developer Forgotten Key recently about the interesting exploration heavy action-adventure AER that is due out on PC, PS4 and Xbox One next year.

"AER is an adventure among the clouds," says Hjelte.

"We wanted to build a game around exploration so all the mechanics we designed and all the world we designed around is to point towards exploration. But you will be able to run around, and transform into a bird and fly around but you'll also traverse down to ruins from an old civilisation and in the end confront gods down in these ruins you will also find a threat. Guardians from ancient times which you have to sneak around and also maybe solve some puzzles. And get to find pieces of the story to piece together."

Our German colleague Martin Eiser recently had a closer look at the game and penned this preview.

"The visuals are minimalist, beautiful, and timeless, and the soundscape is simple but altogether powerful in its own right."

Aer has the "vibe of both Zelda and Journey"

After four years in development, it's almost upon us.

AER is "an adventure among the clouds"

It's still a long way off in the distance, but AER is one game that we can't wait to explore properly.

AER could be released for Wii U as well

But focus is on the announced platforms for now.

Daedalic to publish adventure AER on PC, PS4 and Xbox One 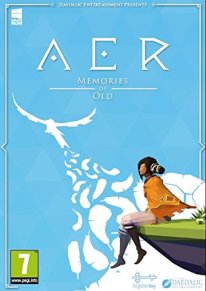