A Plague Tale: Innocence, the upcoming adventure developed by Asobo Studios, had us intrigued when it was shown for the first time during Focus Home Interactive's What's Next. The few minutes of gameplay that were on display were enough to catch our attention as you could read in our preview from a year ago.

To learn more about this upcoming title, we visited Focus Home Interactive to play the first two hours of the game. A reminder from last year: you play as Amicia de Rune, accompanied by her younger brother Hugo, and these two children are persecuted by the Inquisition against the backdrop of the Black Death in a scenario that mixes historical fact and fiction. Spoiler alert: we should warn you that this preview details the first four chapters of the game and if you'd rather not know anything about what happens, we'd advise you to skip straight to the conclusion.

So we scraped away the first layer of the game and the first thing that we noticed, obviously, are the graphics. A Plague Tale starts in a lush forest and the least we can say is that Asobo has mastered the environmental design. The lighting effects, the leaves twirling in the air, the same leaves strewn on the ground; everything is a treat for the eyes. Furthermore, the artistic team brilliantly manages the change of atmosphere. Impressively, the scenery quickly changed from a forest with lush vegetation to a dead forest. We played on a PC and didn't notice any slowdown during our two hours of play.

So, the beginning of the adventure introduced us to Amicia and her father as they walk a dog. The goal of this first chapter is to introduce the first principles of the gameplay as you learn to hide in the tall grass, a trick that'll come in handy later. You will also learn to use one of the weapons of the game - the slingshot - which can be deadly if you aim it just right.

After hunting and slaughtering a boar using your slingshot, you enter your home. The place is filled with characters (mostly servants) discussing the weather, and the place feels very lively. It is at this point that the player meets Hugo, Amicia's younger brother. You'll soon learn that the two characters don't know each other very well, but before we're able to confirm this hunch, the problems start.

The Inquisition is in town and is looking to ransack the De Rune domain, and we're faced with the first stealth section in the game. After finding her brother, Amicia (you) makes her way out of the building, slaloming between soldiers who're killing servants and looting their home. We thus find all the usual gameplay mechanics of this kind of game, and you can hide in the grass, throw pebbles at objects to make noise and distract guards - they're classic but efficient mechanics. The subtlety lies in the fact that you must also manage your brother, Hugo. Most of the time, you hold his hand and he comes along with you without flinching. However, if you have to go somewhere and in doing so you leave Hugo alone for too long, he will panic and risk alerting the nearby guards - an interesting and original idea.

Once outside the castle, the two children head to the nearest village. Then a game of cat and mouse takes place between Amicia and Hugo on one side and the villagers on the other, villagers who hold them responsible for the arrival of the plague. Breaking from the stealthy gameplay, the chapter ends with a boss fight, where you will have to face a man in armour, take down plates of said armour with your sling before finishing him with a headshot.

After escaping the villagers, the siblings head underground, and this time they get to face off the rats. If you have a phobia of rodents we can only recommend you don't play A Plague Tale. The ferocity of these scurrying little critters is frightening at times. To keep them away, you will have to use the light around you, but honestly, even in the comforting warmth of the torchlight, you will never feel completely safe. Although technically we were out of danger when holding the torch, we felt compelled to step back, to stick closer to the light sources in order to be as far away from the rats as possible. Asobo masterfully manages these hordes.

To escape these creatures, you have to play with fire, lighting bonfires, walking around with a torch in hand... During our two hours with the game we alternated between dodging the Inquisition and avoiding the Rats, but we don't doubt for a second that the two will meet later in the game.

Throughout their adventures, the two children get to know each other better. There is a lot of dialogue and the relationship between them is constantly evolving. Sometimes Hugo is sulking, sometimes Amicia needs space, and the interactions during the story are varied and numerous.

You can pick up materials to then improve your meager collection of possessions, such as the slingshot or the satchel. In addition, it will be possible to craft tools or projectile weapons like Ignifer (these are similar to incendiary grenades, making them very useful when it comes to keeping rats at bay), and some of these mechanics felt reminiscent of those found in games like The Last of Us.

It took us just two hours to complete the first four chapters of the game. There is a total of 17 all told, which makes for an estimated (according to the developers) total duration of 12 to 15 hours of play, depending on your speed and your desire to see absolutely everything.

A Plague Tale: Innocence is full of promise. The developer has taken the gamble of telling a story about children in a grim historical setting but in terms of narrative, there's lots of potential. The gameplay isn't that innovative but the mechanics surrounding the rats could open up some interesting tactical options. The stealth sections may be a little repetitive but the presence of Hugo is an interesting addition on that front. This interesting mix of gameplay ingredients, coupled with a potentially captivating story, means that A Plague Tale: Innocence has what it takes to be a good game. We'll be back in a few months with a full review. 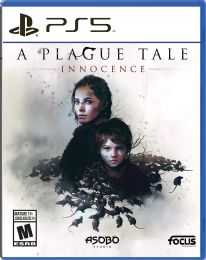