As reported by Dualshockers, in this week's issue of Japanese magazine Famitsu, Marvelous AQL announced that a game in the Story of Seasons universe is being developed for home consoles. The announcement didn't specify what formats will be seeing the release or whether the upcoming game will be region-exclusive to Japan like the previous 3DS instalment Story of Seasons: The Tale of Two Towns+, but we'll likely receive more information shortly.

We do, however, know that the game in development is being developed alongside Doraemon Nobita no Bokujou Monogatari, meaning the recently announced game is a separate game.

"With Story of Seasons, Marvelous Inc. doesn't re-invent farming simulators, and luckily so."

A new Story of Seasons game is in development for consoles

Marvelous AQL recently announced the development of a Story of Seasons game for home consoles. 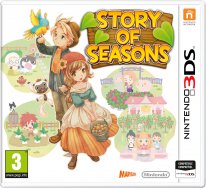