Slightly Mad Studios has already put the pedal to the metal with Project Cars and its sequel, and it turns out the developer isn't done there, as CEO Ian Bell confirmed when speaking to GTPlanet.

"There will be a new pCARS, it's signed," he explained. "I can't tell you anything but don't hold your breath on timings. We plan to blow anything else, planned by anyone else, out of the water... That will take a while."

Slight Mad Studios has never lacked ambition for these games, especially not creative director Andy Tudor when we've spoken to him, so to hear these sentiments echoed with this new game is reassuring for fans of the series.

We don't know details like platforms, whether it's current-gen, or a release window though, as Bell reiterates: "I can't tell you anything."

What does a new Project Cars game need to do to make sure it competes with the rest?

If you'd rather see the game in action than reading a lengthy preview, take a look at our Project Cars 3 gameplay recordings.

Project Cars 3 will start its engines this August

Slightly Mad's new racer is almost ready for another lap around the track.

Slightly Mad Studios revealed the third entry in the Project Cars franchise yesterday alongside a trailer. 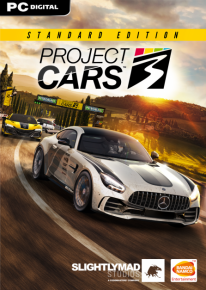