It's been a while since we've been able to crank up the speed and enjoy the brand of action-fuelled racing that we know from the Flatout series. But today publisher Strategy First announced that we will be getting a new entry, and it's coming to PC, PlayStation 4 and Xbox One next year.

It's set to be developed by the French studio Kylotonn Entertainment, the devs that are also in charge of creating the upcoming WRC 5: FIA World Rally Championship.

Strategy First has said that they were looking for a suitable developer for some time, and they're calling the new game the most ambitious title in the franchise's history.

In the coming weeks and months, the publisher and developer will announce different ways in which the community can help shape the game as its created.

"Flatout is our most important franchise. There is a strong vocal community that have numerous constructive ideas and suggestions on what they would like to experience in an all new Flatout. We would like to invite anyone who is a fan of Flatout to be part of the process. We are excited about our partnership with Kylotonn Entertainment," says Strategy First's Emanuel Wall.

We can probably expect a release on mobile platforms as well, as well as more information about the new Flatout coming our way in the near future. As soon as we know more we'll let you know. 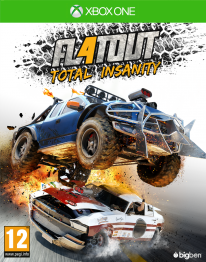