In one sense the Nintendo Switch being home to many a colourful game is an absolutely incredible thing for consumers, since all manner of games great and small are collected together to be played at home or on the go, but on the other hand, it can be hard to stand out with so much on there. That's how we feel about Sky9 Games' A Knight's Quest, which has just released on PC, PS4, and Xbox One as well.

Now this isn't just a Switch game, granted, but we mentioned the Switch firstly because that's the platform we played it on, and also because there are serious Zelda vibes going on here, right down to the art style that made us think back to exploring Breath of the Wild. It's certainly a bright and vibrant game, and that's why it sits right at home on Nintendo's hybrid console.

This tale follows Rusty, a pink-haired hero who unleashes a supernatural power on all the land and must seek out ancient warriors to deal with it. This is done by visiting various areas of the kingdom, which hit all the usual notes of grassland, desert-world, frozen tundra, and more. There's a lot of variety in there, and as mentioned, the vivacity of the visual style means it's certainly not boring.

The world is made up of an interconnected series of open areas, each with its own secrets and challenges to face. Of course not everywhere is open to you at once though, and you'll need to revisit certain areas later when you have certain skills and equipment available to you.

That's because Rusty also gains abilities on his quest too, as he can wield magic alongside a sword and shield. Rail grinding, a little like Ratchet and Clank, makes an appearance, and you can also summon tornados with your sword early in the game, which all keeps things fresh as you push through and find new areas on your quest.

The fighting itself, however, is a little lackluster. The sword and shield have very little weight to them, and you'll mostly be mashing attack while throwing in a magic attack every now and then. Things do improve with extra abilities like heavy attack and jump slam, but it all feels like you're slicing at air rather than making a satisfying connection with the bad guys, and often they just ignore your strikes to pummel you too. There's a functional parry system for arrows too, but again it doesn't add much.

We'd say the joy in A Knight's Quest instead lies in the platforming and puzzle-solving. The jumping is a little floaty, granted, but the puzzles we solved were fun and made use of all the mechanics at our disposal. Not all of these are crucial to the story either, as some just unlock new areas and secrets, as does the platforming, with these large areas hiding plenty for those who want to run and jump around (there are even races and side quests in each level too).

There are a variety of items to pick up in the world as well, which adds some much-needed flavour to the minute-to-minute gameplay. Bombs can be used alongside healing items, with healing pools also available on your adventure to replenish, and using these alongside your other abilities is the key for enjoyment, rather than success, especially when it comes to the bombs.

The bosses are a highlight of the experience, as you're tasked with using all your skills to defeat them, since they have shields, powerful attacks, and unexpected moves. They also offer a lot more challenge than just button-mashing combat - which can be used with a lot of other enemies - and so we enjoyed the extra thought that had to go into these battles.

Throughout these areas there are coins to collect as well, coming from chests, fallen enemies, and more, and these can be spent in a number of ways. You'll need to pay to use the healing wells, firstly, but you can also spend money and resources in the town, like the blacksmith who can improve your weapons for a fee.

This town is the nucleus of your experience, and here is where you'll often get story pointers too. Your friend is here to help you, after all, and there are townspeople and a mayor as well. The trouble is that this feels like more style than substance, and it's actually pretty dead when you look closely, with only a few NPCs to interact with and no reason to stick around once they've given you what you want or a marker to follow on the map.

This same 'style over substance' can be applied to the overall narrative too. It's a real shame that there's no spoken dialogue, because the silent text boxes didn't help with a story that's really quite shallow. There are also cringe-worthy phrases like "bodacious" thrown in there, and none of the characters are that likeable or relatable. They all seem like stock characters thrown in there to fill a role and nothing more.

You might have noticed our comparisons to other games in this review, and that's with good reason, because we feel like A Knight's Quest is trying to be a greatest hits package of a load of other games, especially Zelda titles. Unfortunately, there are plenty of titles out there that do what this is doing, except with better results, leaving this to feel like an imitation rather than its own adventure.

That's not to say that this is all just a cheap imitation. Fans of these kinds of games will still have fun with the platforming, the puzzles, and more in A Knight's Quest, but those who have played similar titles won't get the same level of enjoyment, especially with a story that falls flat and a combat system that lacks the necessary weight.

Gamereactor UK
+
Lovely art style, Platforming and puzzles are fun, Boss fights are entertaining.
-
A lot of games do what this is doing, but better, Combat lacks weight, Story and characters fall flat.
is our network score. What's yours? The network score is the average of every country's score

"A Knight's Quest is trying to be a greatest hits package of a load of other games. Unfortunately, there are plenty of titles out there that do what this is doing, except with better results." 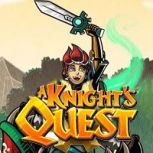