Atlus shared a little good news this weekend. Shigenori Soejima, the lead character designer on the Japanese publisher's famous art team, has created a drawing for Persona 4: Golden because the recently released PC version is very popular on Steam. Just in time for the 10th anniversary of the Japanese PS2 original (which first launched on July 10, 2010), the company was pleased to announce that 500,000 players bought this PC port in the first month. Understandably, since it's still a golden JRPG if you ask us. 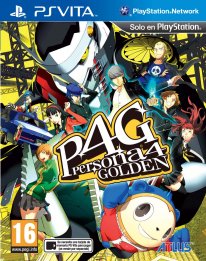