It was back in February of 2012 that Double Fine Productions unveiled "Double Fine Adventure" - a Kickstarter campaign were they were looking for $400,000 to do a "small-scale" adventure game penned by industry legend Tim Schafer (who hadn't directed an adventure game himself since his days at LucasArts) even if Psychonauts and Brütal Legend were great games in their own rights, this was meant as something smaller and a lot more point-and-clickey.

What Double Fine Productions didn't know when they went ahead and published their Double Fine Adventure was what would happen next. At the end of the month they had received more than $3.3 million in backer cash from more than 87,000 gamers. In addition to developing a game, Double Fine had trouble getting publisher funding for they'd also vowed openness with their backers.

October 2012. That was the initial delivery date for Double Fine Adventure - a game that is now called Broken Age. But in all honesty, the modest aspirations of DFA were thrown out as soon as it dawned on Tim Schafer and the team just how much support they had. Clearly people were expecting great things, and Double Fine felt an obligation to deliver something as ambitious as the support deserved. The team grew, the story grew, and it soon became clear that deadlines would not be met. In fact, back in July Double Fine announced they would be splitting the game up in two parts (backers would get both) as a way to get the game out early in 2014 without sacrificing quality. The second part is scheduled to arrive later in the year.

Broken Age, broken in two. Perhaps fitting as the story revolves around a boy and girl - each facing their own challenges. The boy lives alone on his spacecraft, while the girl has been chosen to be sacrificed to a monster by her village. As you'd expect from a point-and-click adventure born in the mind of Tim Schafer there will be plenty of strange and weird characters along the way, even if the setting and tone of the game seems a little different than his previous work. At least at a casual glance.

The aesthetics of Broken Age is something that you simply have to see for yourself. There is a handcrafted quality to the visuals and animations that makes it stand out. It's simply inspired. The animations and art is one area aside from the actual writing that seems to have dragged out development. Another area that appears inspired is the sound, moody music and handcrafted sound effects are vital when it comes to creating that special point-and-click atmosphere Broken Age aspires to.

Double Fine have assembled an interesting cast of voice actors that includes returning talent like Jack Black (Brütal Legend), Jennifer Hale (Brütal Legend), Nicki Rapp (Psychonauts) and Ginny Westcott (Day of the Tentacle). Elijah Wood will voice one of the main characters the boy (Shay) and Wil Wheaton also has a part to play. It's an impressive cast, even more considering the fact that it's a self-published effort.

There is a lot of pressure on Double Fine Productions to deliver on the promise of Broken Age. It's taken far longer than the backers were initially told and the eyes of the world are on the studio. Perhaps they'll live to regret the openness that has spawned 12 documentary episodes (so far), but we're still very hopeful that Broken Age will live up to our lofty expectations. Fingers crossed Double Fine won't miss any further deadlines.

"It may not be Tim Schafer's most memorable work, but it offers a nice treatment of some themes that are seldom well represented in video games."

"What really elevates Broken Age from just a nice story with simple and proven point-and-click mechanics, is the presentation."

Double Fine on your coffee table.

PS Plus games for October announced

Along with new trailer to ready you for what's next.

Due out on April 29, when the PS4 and PS Vita versions also see release.

Double Fine head speaks out on treatment of 22cans creator.

Day and date release with Act 2 on PC. 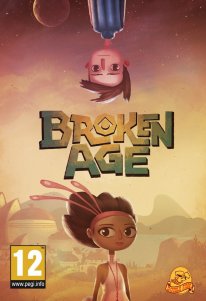